"F All Politicians": All the Candidates Statements 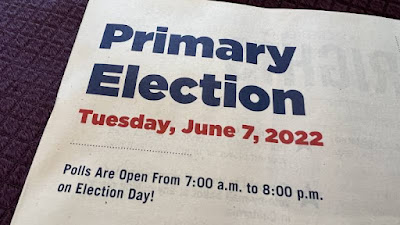 A quick browse through California’s Voter Information Guide illustrates how it is that grown members of Congress speak of Jewish Space Lasers and other utter nuthood. Politics breeds nuthood.

Republican Senate candidate Chuck Smith’s brief ballot statement stresses “I believe God wants to use me to help Him to make America Righteous Again.” So much for separation of church, state, and upper- and lowercase.

Just below Chuck on the voter guide, Democratic opponent Akinyemi Agbede demands we “Rescue America!!!” adding “America must be Revived from collapsing. Therefore, electing Akinyemi Agbede, for the United States Senate is the answer.”  (Capitals and commas his and that’s hs entire statement.)
Next, apparently too far out in right field to call himself Republican, some guy named Grundmann (no photograph submitted) starts out, “In my campaign for sanity my background and qualifications are: The poisonous fake vaccines don’t work …” and his candidate statement goes downhill from there.

On the very opposite side of the aisle is John Thompson Parker running on the Peace and Freedom ticket. Parker states, “Ownership of production and finance must be controlled by the people,” and frankly I’m disappointed he didn’t capitalize people. You can’t be considered a serious socialist or communist if you don’t capitalize people.

Incumbent Alex Padilla, who was appointed by Gov. Gavin Newsom to replace Vice President Kamala Harris, is running both to confirm his appointment and to get on the November ballot. He put forth a fine statement that was a welcome change from his main Twitter message as of late, which was “I’m on the ballot twice. Don’t mind me.”

“I emphasize without beguilement nor prejudice how solemn my words must tender to assuage your unfeigned hardship & bereavement, cloaked in the uncertainty of loss.”

“I am informed on water policy, have realistic solutions to water management while protecting salmon and trout and have reasoned solutions to the homeless and fire problems.”

“With Jesus as my foundation, I’ll bring accountability back to our government, God back our country …”

But of course, the award for Best Candidate Statement goes to Mariana B. Dawson, whose three-word statement spans all political bents: “F all politicians.”