Where Was Enrique of Malacca From, Malacca or the Philippines? 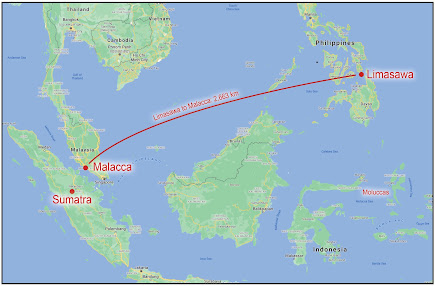 It is uncertain where Enrique of Malacca was born. Three places are considered possible: Malacca, then a major trade hub on the Malay Peninsula; Sumatra, the large island adjacent to Malacca (modern-day Indonesia), and the Visayan Islands in the (modern-day) Philippines. The following article examines all three possibilities and the evidence available.

It’s notable that Enrique of Malacca witnessed first-hand a huge amount of history being made over the broadest possible expanse of the globe, and yet we know very little about him. In fact, only a handful of contemporary sources mention Enrique, and they disagree on his origin. The mentions we do have, however, outline Enrique’s incredible decade-long voyage, and the notion that he may have been the first human being to circumnavigate the globe.

Enrique most likely grew up in Malacca, on the Malay Peninsula. Here is the evidence.

Ferdinand Magellan took Enrique as a slave following the Portuguese invasion of Malacca in 1511, when Enrique was a teenager. Enrique returned to Portugal with Magellan shortly after. In 1519, before departing Seville with the Armada of Molucca, Magellan made a will in which he freed Enrique upon his death. (Though it was unplanned, the Armada of Molucca was the first expedition to circumnavigate the Earth.) On Enrique, Magellan said:

And by this my last will and testament, I declare and ordain as free and quit of every obligation of captivity, subjection, and slavery, my captured slave Enrique, mulatto, native of the city of Malacca, of the age of twenty-six, more or less, from the day of my death thenceforward forever …[1]

Next comes confusion from Antonio Pigafetta, the chronicler who accompanied the Magellan-Elcano expedition and one of the 18 survivors who circled the globe returned to Seville aboard the Victoria three years later. Pigafetta first mentions Enrique—though not by name—at that historic moment when the fleet reached Limasawa Island (modern-day Philippines), and Enrique could suddenly converse with men who rowed out to meet their incoming ships. Said Pigafetta:

A slave belonging to the captain-general, who was a native of Zamatra [i.e., Sumatra], which was formerly called Traprobana, spoke to them. They immediately understood him, came alongside the ship, unwilling to enter but taking a position at some little distance.

Pigafetta introduces Enrique as from the island of Sumatra. But the Italian scholar had only known Enrique and Magellan for two years (all three sailed on the Trinidad), and unlike Magellan, Pigafetta had not traveled to Asia and Malacca previously.

What’s more, when the Portuguese arrived in 1509, the thriving Malacca Sultanate controlled a large swatch of northeastern Sumatra directly across the Strait of Malacca. It’s possible Pigafetta was confused or considered Sumatra a larger geographical entity.

It’s also possible that on some calm stretch of sea Pigafetta pulled out maps and charts, and, over several cups of wine, goodheartedly interrogated Enrique about his homeland and language and customs. It was the sort of thing Antonio Pigafetta was wont to do, both the questions and the wine. If Enrique was from Sumatra, he may have been from the area considered part of the Malacca Sultanate.

A Disney movie about Enrique of Malacca would certainly use Magellan’s landing at Limasawa as a triumphant climax. After a harrowing three-month crossing of the Pacific Ocean, the fleet reached this island where Enrique could converse with people. Columbus and others had tried to sail west to reach Asia before. At Limasawa, Magellan proved it could be done.

Scholars in the Philippines believe that since Enrique could converse with people at Limasawa, he had to have been from the Visayan Islands, or possibly Cebu, in the Philippines. Author Tim Joyner offers a clear introduction:

Magellan had acquired Enrique in Malacca in 1511. Pigafetta said that he was from Sumatra, but Philippine scholars have suggested that a native of Sumatra could not have understood the dialect spoken in the Central Philippines. They deem it more likely that Enrique had been raised in the Central Philippines, was captured, then sold into slavery in Sumatra before being taken to Malacca. If so, Enrique was the first human to have completed a full circuit of the Earth.[2]

But in fact, Enrique was more likely speaking Malay, the language used in regional trade for some time. Antonio Pigafetta’s explanation points to this.

When the king [rajah] came near the flagship, the slave spoke to him. The king understood him, for in those districts the kings know more languages than the other people.

The king told him … it was their custom for all ships that entered their ports to pay tribute, and that it was but four days since a junk from Ciama [Siam] laden with gold and slaves had paid him tribute. As proof of his statement the king pointed out to the interpreter a merchant from Ciama, who had remained to trade the gold and slaves. …

Thereupon, the Moro merchant said to the king …“Look well, sire. These men are the same who have conquered Calicut, Malaca, and all India Magiore [Major]. If they are treated well, they will give good treatment, but if they are treated evil, evil and worse treatment, as they have done to Calicut and Malaca.”

The interpreter understood it all and told the king that his master’s king was more powerful in men and ships than the king of Portogalo, that he was the king of Spagnia and emperor of all the Christians, and that if the king did not care to be his friend he would next time send so many men that they would destroy him.[3]

The Malay language thereby became the main language of trade throughout Southeast Asia … It was possible for Magellan’s Sumatran slave to be immediately understood when he spoke to the people in the center of the central Philippines in 1521, and almost two centuries later for Dampier's Englishmen to learn Malay in Mindanao (Southern Philippines) and use it again at Paulo Condore, off Southern Vietnam. It was during this time that hundreds of Malay words in commercial, technological and other fields passed into Tagalog; that the major trading centers in Cambodia came to be known by the Malay-derived term Kompong; and that the Vietnamese adopted such words as cu-lao (from Malay pulau, for island).[4]

All the same, Enrique of Malacca has become adopted and celebrated in the Philippines. One children’s book inspired by the character is First Around the Globe: The Story of Enrique, by Reni Roxas and Marc Singer, with illustrations by Arnel Marisol. In 2017, its publisher, Tanahan Books, released a twentieth-anniversary edition. 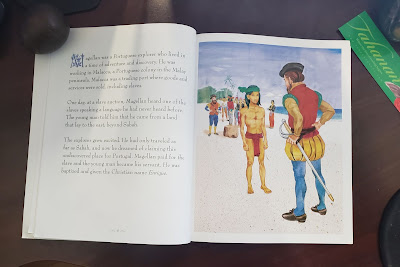 In a March 2021 webinar, authors Reni Roxas and Carla Pacis joined National Artist for Film Kidlat Tahimik and historian Danilo Gerona for in-depth discussion of Enrique in fiction, including positive viewpoints on Enrique’s origins and solid historical perspective from Gerona.

It's worth noting that in 1519-1521, the Portuguese hated Magellan because he was sailing for Spain, while the Spanish hated him because he was Portuguese. Yet today, both countries claim Magellan and his accomplishment.
As for Enrique, whatever his origin, Enrique of Malacca has become a hero in greater Southeast Asia and the world as a whole.

1. From an English translation of Magellan’s last will and testament, taken from F.H.H Guillemard’s The Life of Ferdinand Magellan and the First Circumnavigation of the Globe 1480–1521 (published in 1890).

2. Joyner, Tim. Magellan. International Marine (publisher), 1992. Note: Joyner’s Magellan is the broadest and most historically accurate of recent biographies on Ferdinand Magellan. Joyner covers both Magellan’s early career serving the Portuguese in East Africa and India, as well as the first circumnavigation.

3. From Antonio Pigafetta’s journal covering the Magellan-Elcano expedition, the first undertaking to successfully circumnavigate the globe.

Learn more about Enrique of Malacca:

• Who was Enrique of Malacca? (History/Biography)

• What was Enrique of Malacca’s Real Name?

• What was Enrique of Malacca’s Cause of Death?

• Was Enrique First to Circumnavigate the Earth?

• Where was Enrique of Malacca from?

• Was Enrique of Malacca Filipino?

Ferdinand Magellan’s Armada de Molucca was financed by Carlos I (1500–1558), the newly crowned king of a unified Castile and Aragon. Carlos was an eighteen-year-old Habsburg from Flanders who barely spoke Spanish. Between the time he agreed to back Magellan's expedition and its departure, he became Charles V, Holy Roman emperor, and archduke of Austria.   Read More.

Schoolchildren around the world are taught the name Ferdinand Magellan[1]—“the first person to circumnavigate the globe”—many in grade school and again high school. But few people know Magellan's story, that he was killed in the Philippines halfway through that circumnavigation, and moreover, that he still came within 2,600 kilometers of fully circling the earth. Read more.

For Ferdinand Magellan, life moved swiftly from tropical amphibious combat in Southeast Asia to land war on horseback in North Africa. Magellan returned to Lisbon in 1512 or 1513, bringing with him Enrique, the slave he claimed at Malacca. Unfortunately, the Malay teenager was about all the fortune Magellan collected in seven years’ service in India. Magellan invested the riches he collected in a trade deal that went sour, a slap in the face he learned of on return to Lisbon … Read more.
Magellan Beats Mutinies, Sabotage, Starvation to Cross Pacific (Magellan Part 3)

Spain's King Charles named Magellan captain-general of the Armada de Molucca, but from the start he had to enforce his authority with an iron hand. In Asia a decade earlier Magellan had been more soldier than sailor. Now as commander of a naval fleet, Magellan relied on his military fleet background to maintain control of his own armada. Read more.

Juan de Cartagena, a native of Burgos, was the original captain of the San Antonio and one of the human obstacles Ferdinand Magellan had to overcome on the expedition. History labels Magellan and Columbus and other ship captains as “explorers” and “navigators.” Cartagena is identified as “an accountant and a ship captain” [1], not quite the swashbuckling image that inspires fifth graders in history class.   Read more.