Left-Hand vs. Right-Hand Drive? It Goes Back to the Sword

If you've just driven the "Le Shuttle" automobile train (that carries cars) between Britain and France, or are cruising across the border between China and Pakistan or China and Hong Kong—watch out!

Are you driving on the right (correct) side of the road?

In about 75 percent of countries in the world, people drive on the right side of the street. When those same people travel to places like or the , they are often heard to exclaim, "Why the heck is everybody's driving on—not the right side but—on the wrong side of the road?" (Of course, the British and the Japanese report similar bewilderment when abroad).

The practice of left-hand driving started long before the car. In Roman times and beyond in Europe, people on horseback (or chariot) wanted to stay to the left in case they chanced upon an opponent or thief.  Then they could use their right arm with a sword or other weapon to attack and defend.

But in the 1700s, things got weird. People began transporting farm goods in wagons drawn by teams of horses. These simple wagons had no seats, so drivers would ride the rearmost horse on the left, so their right hand would be free to whip all horses.

Then when two wagons passed, drivers wanted to keep right so they could better guide the wagons so as not to have wheels catch or other problems.

Henry Ford’s Model T automobile, introduced in 1908, changed everything. Ford made a car the common people could afford, and they did; suddenly the American dream included owning an auto for weekend road trips, and Ford's assembly line made it possible.

Importantly, Henry Ford put the driver’s seat on the left of the car—meaning they would be driven on the right side of the road. The new vehicle set the trend. It quickly convinced countries such as , , and to make the switch to right-side driving.

waited until 1967 to make the change. The government wound up spending $120 million to make it happen.

In , left-side driving goes back to the country’s first trains, not surprising in Japan, a country long hooked on rail. When Japan was looking to build its first rail, it was approached by companies from the , the , and . The Brits won out. ’s first railway, British-built in 1872, ran trains on the left. Horse railways and electric trams, and later automobiles, followed.

Over time, as Sweden learned, it becomes difficult or impossible to change things like this. Any suggestion of switching would instantly divide people politically—literally the left vs. the right. 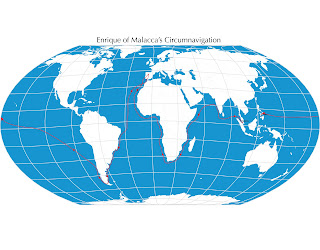 On March 28, 1521, Enrique of Malacca became the first person to complete a linguistic circumnavigation of the globe—he traveled so far in one direction that he reached a point where his language was spoken. Enrique’s journey began a decade earlier following the sack of Malacca, when he became a slave of Ferdinand Magellan. A teenager, he accompanied Magellan back to Portugal, then to Spain, and finally on the Armada de Molucca to locate a westward route to the Spice Islands.  Read more: