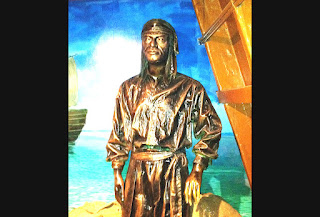 I've added new FAQs to the Enrique of Malacca website. These cover the most-common internet searches involving the sixteenth-century character Enrique, the first human to circumnavigate the globe, linguistically if not completely.

A slave taken by Ferdinand Magellan in Malacca in 1511, Enrique has captured the imagination of people around Southeast Asia and the world—despite the mere handful of mentions of Enrique by contemporary writers.

One of the most debated questions is Enrique of Magellan's origin, where he was born and grew up. Three places of origin are most likely, based on historical evidence: Malacca, Sumatra, and the Visayan Islands in the Philippines. Enrique has become a popular hero in all three.

• Who was Enrique of Malacca? (History/Biography)

• What was Enrique of Malacca’s Real Name?

• What was Enrique of Malacca’s Cause of Death?

• Was Enrique First to Circumnavigate the Earth?

• Where was Enrique of Malacca from?

• Was Enrique of Malacca Filipino?

Ferdinand Magellan’s Armada de Molucca was financed by Carlos I (1500–1558), the newly crowned king of a unified Castile and Aragon. Carlos was an eighteen-year-old Habsburg from Flanders who barely spoke Spanish. Between the time he agreed to back Magellan's expedition and its departure, he became Charles V, Holy Roman emperor, and archduke of Austria.   Read More.

Schoolchildren around the world are taught the name Ferdinand Magellan[1]—“the first person to circumnavigate the globe”—many in grade school and again high school. But few people know Magellan's story, that he was killed in the Philippines halfway through that circumnavigation, and moreover, that he still came within 2,600 kilometers of fully circling the earth. Read more.

For Ferdinand Magellan, life moved swiftly from tropical amphibious combat in Southeast Asia to land war on horseback in North Africa. Magellan returned to Lisbon in 1512 or 1513, bringing with him Enrique, the slave he claimed at Malacca. Unfortunately, the Malay teenager was about all the fortune Magellan collected in seven years’ service in India. Magellan invested the riches he collected in a trade deal that went sour, a slap in the face he learned of on return to Lisbon … Read more.
Magellan Beats Mutinies, Sabotage, Starvation to Cross Pacific (Magellan Part 3)

Spain's King Charles named Magellan captain-general of the Armada de Molucca, but from the start he had to enforce his authority with an iron hand. In Asia a decade earlier Magellan had been more soldier than sailor. Now as commander of a naval fleet, Magellan relied on his military fleet background to maintain control of his own armada. Read more.

Juan de Cartagena, a native of Burgos, was the original captain of the San Antonio and one of the human obstacles Ferdinand Magellan had to overcome on the expedition. History labels Magellan and Columbus and other ship captains as “explorers” and “navigators.” Cartagena is identified as “an accountant and a ship captain” [1], not quite the swashbuckling image that inspires fifth graders in history class.   Read more.