Clouded Ambitions, Far in the Red 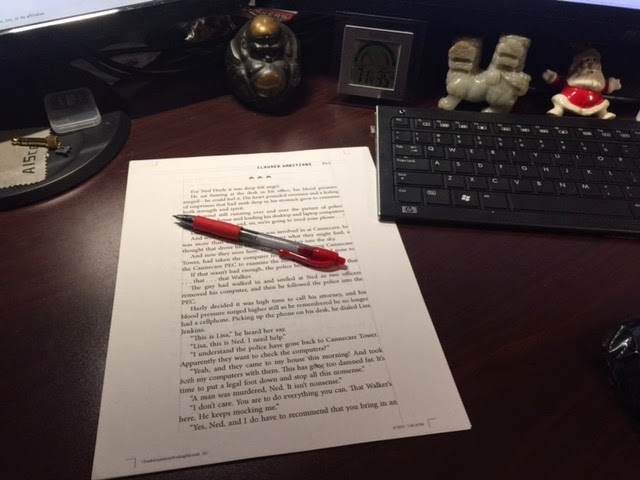 Clouded Ambitions is entering its final stages of ink on paper. For me, it isn't the hunt for editing perfection that challenges so much as facing the mounds of red ink that stare back like a bad bank statement, and knowing I have to sort through them and type in changes.

Next comes polishing of page design for print, and then formatting for e-books. Clouded Ambitions will be released this spring in deluxe paperback and popular e-book styles including Amazon Kindle, Barnes & Noble Nook, and Apple's iBooks.

In Clouded Ambitions, Book 2 of the Gourmet Gamer Mysteries, murder again strikes the tech industry, this time in Seattle, where a video game startup is forced to hunt down a murderer using technology, junk food, and an unhealthy ability to sit indefinitely in front of screens and monitors, and never lose the urge to win.


Woeful WasteWorld: Within a hundred miles of , the zombies were replaced by vampires and occasional werewolves. These new obstacles didn't come in the numbers the zombies had, but if Bernard hadn't been ready (he had already been killed and re-spawned several times), he wouldn't have made it this far. You see, vampires being dead, after all, were not easy to kill—until you learned to buy silver bullets.


It was getting late as Patricia and Chen made their way out of the mall, but Patricia had promised to find some sightseeing for Chen. Walking to their rental car, she took out a list of sights O’Brian had given her, hoping to find somewhere worth stopping on the way back to the Pendrite.


"Wo zhende buliaojie tade zhao ben (I really don’t understand the story),” Guo Shangzhen complained, and judging by the agreeing murmur echoing through the room, his colleagues were equally confused. Oh, the project was intriguing. They were creating rooms and halls, as they would be for any video game project, but the plans called for novel features—audio and temperature sensors, as well as cameras built into the ceilings, the walls, and even the floors in some places.

When Video Games Meet Murder: A Look at Gamer Mysteries

The mystery genre has proven to be among the most versatile, mixing easily with different time periods and settings, as well as with other genres. The Gourmet Gamer Mysteries, Flying the Coop and Clouded Ambitions, bring the mystery genre into the world of video game developers and venture capitalists, where the same technology that is used to create our favorite video games is used to hunt down brick-and-mortar murderers.

The mystery pops up in numerous genres. It proved a staple for science fiction classics, in print and film, and it has crept into animated features, comic books, and more. It also finds a natural fit with video games, whether it's authors seeking new turf for an intense murder investigation or game designers who see the thrill in a good whodunit.


Check out Flying the Coop: The Video Game Mystery Novel, in print and e-book: