Spell It Like It Is: Pronouncing Foreign Words in English 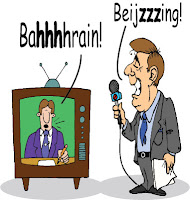 "Pakiston," they say, not . It's spelled with an A but pronounced with a short O.

I'm sure it is not a bad thing to try to pronounce place names the way they are said by the people that live there, but it is a definite jump in inconsistency.

We rarely hear, for instance, pronounced in two syllables in English, as it is in Japanese (To-kyo). In English it's three syllables: To-key-o. And you rarely hear the French pronunciation of  in English, even though it is widely known.

Then we have to deal with the fact that we might hear a short O (as in on) for , but still a short A (as in an) for , , , and all those other Stan countries (note that stan nearly rhymes with its English counterpart, -land). And we're left wondering if we are mispronouncing them all.

The forced pronunciation seems also to have a hint of the showoff to it. Whether it's an international journalist on the BBC or CNN, or a tourist on the return leg of an ocean cruise, the localized pronunciation makes whatever they say more authoritative (this is a confession, not an complaint).

It's kind of like SpongeBob practicing "Ka-rde-tay," a.k.a. Karate, to show that he knows how to say the word in Japanese. The kara in that word, incidentally, means "empty," as in "empty hand." We see the same syllable in the word karaoke, another word imported from Japan, though in it is pronounced not carry-okee but something more like kaa-raa-OK, meaning "empty orchestra." Note the two different pronunciations we give the syllable in English: karate (ka-rough) and karaoke (ker-ee-).

And the forced pronunciation is even less consistent considering we use English place names, not the native ones,  for numerous places -- , , and , for instance, instead of Deutschland, Zhongguo, and España.

All the same, the effort to convey the language and culture of places is commendable enough to overcome the usage objections. But what is plain inexcusable is when a forced pronunciation proliferates and is just plain wrong.

One odd example is a common mistake in the pronunciation of , China's capital, which far too many news broadcasts add a mysterious Z sound in the middle of, so it comes out something like Bei-jzzzzing.

In fact the J in Beijing is, in Mandarin, very close to the sound we give the letter in English, but is made with the tip of the tongue curled downward near the front teeth, and also is influenced by the vowel I that follows (in Pinyin the equivalent of a long E, as in the surname Li/Lee).

If you pronounce it just as it is spelled, with a regular J, or the soft G in gin, you will come much closer to the Chinese pronunciation than with a Z sound. Other words with this consonant-like sound include majiang, the game, and jiangyou, the Chinese word for "soy sauce."*

Apparently there is a word for these mistaken pronunciations: hyperforeignism, which is a nonstandard form caused by trying to impose a foreign pronunciation on English.

And if there is a hint of a showoff in my throwing a word like hyperforeignism around, then I admit I found it on Wikipedia.

* There is a second J sound in Mandarin, made with the tip of the tongue curled upward on middle of the roof of the mouth. In the Pinyin Romanization system it is spelled ZH, as seen in the name of city originally known abroad as , and now called .

Email ThisBlogThis!Share to TwitterShare to FacebookShare to Pinterest
— Word Notes