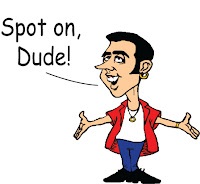 It appears the spread of language across the is more and more a two-way street.

A BBC report explores how elements of British English are making their way into Americans' speech.

From idioms like spot on to even some pronunciation features, Americans have been picking up Britishisms just as American English has spread to the

Ben Yagoda, a professor of English at the , has set up a blog to track instances of British terms in American speech.

He has found more than 150 terms so far, including the long game, which President Barack Obama used in at least one speech.

See the blog, Not One-OffBritishisms, here.

The BBC report notes that Kory Stamper, associate editor with the publisher Merriam-Webster, said she has seen British terms entering the company's dictionaries, which are used widely by publishers in the .

One term that has made it into American English is the use of ginger to describe a hair color. Dozens of words in the first Harry Potter book were changed for the American market, but that is one that was not.

The spread of American terms to the has been seen for some time, carried by American films, television, literature, and news.

But that the sharing of terms has gone both ways, with the popularity of British television in the U.S. on PBS, BBC America and other stations—from "Monty Python" in the 1980s to "Downton Abbey" today—as well as British news sources, from "The Economist" to the BBC.

Read more at the BBC.