An Historic Mispronunciation: A vs. An 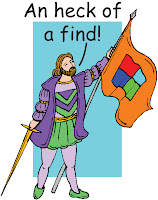 "An historic moment," proclaims the speaker, the an apparently lending weight to the event.


To which I have to reply: "Would you like an hot dog, or perhaps an hamburger?"

More and more I hear an used with historic and historical in American English, on TV and elsewhere, even where a hard H is clearly pronounced. At times it borders on a tongue twister.

The rule for articles of course is to use a before words that begin with a consonant sound (a book, a cat) and an for words starting with a vowel sound (an apple, an elephant).

And as with many words beginning with the letter H, historic and historical fall into a gray (grey) area, since some words take on a strong H sound (a hat, a hospital) while the H becomes in others silent (an hour, an honor).

This all comes more confusing when going back and forth between British to American English, since the H is treated as silent in many more words in British English. I remember as a kid seeing the words "an hotel" in the comic strip "Andy Capp" and have heard hotel and many other words pronounced with a silent H since.

And confusing the matter more is the word herb, which in American English has a silent H (like erb), but has a very strong H in British English (a herb, a herbal). To the American eye, "a herb" might refer to the ad salesman on the TV show "WKRP in " (He sounds like another Herb to me).

But back to the point: historic and historical have clear hard H's in American English, though there often seems to be reluctance over the sound by speakers that use an with the words—as if they aren't sure.

And that's when they should use the hot dog comparison. Was it a historic hot dog? Both H's here are pronounced largely the same.

Granted, the a sometimes seems to clash with the H (It was a historic day), if the H is not pronounced too strongly. But try pronouncing the a with a long A sound (ay historic), and the H begins to take on the flavor of a hot dog, (clearly not an hot dog).

So unless the H is silent, which it might be among some speakers, stick to the article a and say it proudly, just as you would the noun form, history (a History of the English-Speaking Peoples, Winston Churchill's famous book, which, to be honest, has no article whatsoever).


Footnote: A week after posting this I have found a Home Depot commercial playing repeatedly on ESPN3 (an online streaming channel) where one sports fan asks another if he wants "an hot dog." I'll have to find another prime example, maybe "an horrible choice."

Email ThisBlogThis!Share to TwitterShare to FacebookShare to Pinterest
— Usage Notes